CTV Edmonton
Share on FacebookShare Share on TwitterTweet
The first seven-digit prize will be drawn on the day Alberta drops most COVID-19 restrictions, Day 1 of Stage 3 reopening. 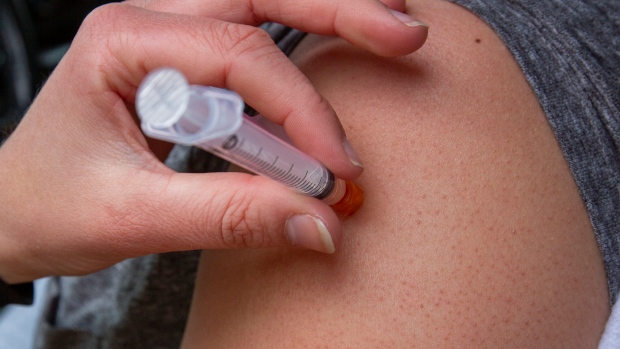 EDMONTON -- Some of the ins and outs of Alberta's COVID-19 vaccine lottery – which will see three people win $1 million – were revealed Monday.

The first seven-digit prize will be drawn on the day Alberta drops most COVID-19 restrictions, Day 1 of Stage 3 reopening.

Registration opened Monday at noon and will remain open until one week after the province reaches 70 per cent first-dose mass immunization.

Registration for the second $1-milion prize will close Aug. 24, and for the third grand prize on Sept. 23.

Other non-cash prizes, Premier Jason Kenney said during a news conference on Monday, will be announced in the coming weeks.

"We knew a point would come when we would run out of low-hanging fruit in terms of people who were eager to get the jab, and we reached that point about a week, two weeks ago," he said.

"Now it's a game of inches. We just have to get every single person we can."

All Albertans aged 18 and older will be eligible to register.

Kenney said the province was exploring other programs for youth aged 12 to 17 who had been immunized.

Albertans need only register online once and they are automatically entered into all of the draws. They may register for someone else. At that point, no proof of vaccination will be needed. Health Minister Tyler Shandro said that was a design decision to make the process as easy as possible and less burdensome on administration. Instead, ID, proof of residency and immunization record will only be needed to claim a prize.

According to Shandro, the government considered several different prize schemes but after consulting lottery drafting experts and Alberta Gaming, Liquor and Cannabis, concluded the "if we had three prizes of a million each, then that was going to be enough for us to get enough folks to register for this lottery."

Those who not allowed to register include: MLAs and their family members; political staff employed by the premier; and public service workers or contractors and employees of contractors who were involved in designing the lottery.

Albertans with the Johnson & Johnson vaccine – which only requires one dose – will be eligible for all the draws.

Any $1-million winner will not be eligible to win other prizes.

The second and third $1-milliion prizes are scheduled to be drawn on Aug. 31 and Sept. 30.

Full contest rules are available at the registration page.

WILL ALBERTA REACH 70 PER CENT IN TIME FOR JULY 1?

The slowing vaccine uptake is presenting a time crunch to the government that wants to be fully open for summer.

According to Kenney, some 48,300 people need to be vaccinated before it reaches its 70 per cent benchmark. According to the latest data, 68.7 per cent of the eligible population had been vaccinated with at least one dose.

"If we are to have a fully back-to-normal Canada Day, we have to hit 70 per cent first dose vaccination no later than this coming Thursday. Thursday, June 17," the premier said.

He said according to government polling, 85 per cent want or are open to getting the COVID-19 shot, so it's a matter of winning over the last 15 per cent.

"Many of them are younger men. They are typically not opposed to the vaccine; they say they're likely to get it, but I don't know. They've got busy lives or it's just not a priority. A lot of those guys probably don't worry too much about their health. We just need to them to get a sense or urgency," Kenney speculated.

He announced the province's plan to incentivize residents over the weekend in a video message taped at an empty Edmonton EXPO Centre, the capital city's largest immunization clinic.

"(Some) feel like 70 per cent vaccination target is not based on public heath evidence but rather was an arbitrary number that was designed to get us to certain summer activities like the Stampede, and that the government is all of a sudden is trying to push us towards that 70 per cent through collecting vaccine data from snowbirds … and now creating this lottery," Lorian Hardcastle told CTV News Edmonton.

She also said a lottery may set a precedent or expectation, rather than increasing public trust in vaccination.

Kenney denied either was true, telling media on Monday he always expected a drop off in participation and the significance of second doses was the reason his government tied the second and third draws to full immunization.

"It's not just for the last two per cent to get us to this 70 per cent target for Stage 3."

Manitoba was the first Canadian province to announce a COVID-19 vaccine lottery with $2 million in prizes.