Sportsnet.ca
Share on FacebookShare Share on TwitterTweet
The way the Toronto Blue Jays' rotation rolls out from here after another bullpen game – backed by two Matt Chapman homers and a George Springer three-run shot – in Friday’s 6-3 victory over the Baltimore Orioles, both Alek Manoah and Kevin Gausman

TORONTO – This weekend is an opportunity for the Toronto Blue Jays to focus the rest of the regular season on what’s in front of them rather than what’s behind, a chance to help ensure the return engagement Oct. 3-5 against these Baltimore Orioles is a tune up, nothing more.

The way their rotation rolls out from here after another bullpen game – backed by two Matt Chapman homers and a George Springer three-run shot – in Friday’s 6-3 victory, both Alek Manoah and Kevin Gausman can be available for that close-out set at Camden Yards. 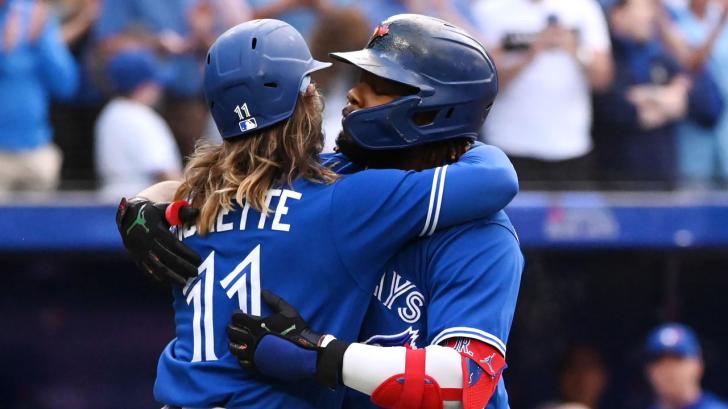 That’s great, if necessary. Far better for the Blue Jays (82-63), now six games clear of the fourth-placed Orioles (75-68) in the wild-card standings, is making sure their dominant front two is rested and available to pitch in the first round of the playoffs beginning Oct. 7.

They created separation from the upstart Orioles by taking three of four in Baltimore Sept. 5-7 and while it’s perilous to look too far forward, if the Blue Jays capitalize on this series, they’ll make their lives much easier for the rest of the campaign and beyond.

A third bullpen day in the past two weeks, not including Tuesday’s Mitch White bulk-inning outing in the doubleheader against the Tampa Bay Rays, couldn’t have gone much better for the Blue Jays. Trevor Richards opened by striking out the side, Julian Merryweather followed with two clean frames and Chapman’s first homer, off Jordan Lyles in the second, opened a 1-0 lead.

Yusei Kikuchi, almost to script, took over in the fourth, immediately allowed a Cedric Mullins triple and Adley Rutschman homer and then settled down to retire his next six batters, the latest Jekyll and Hyde outing that is both infuriating and intriguing.

That carried the Blue Jays through five frames and they took control in the bottom of the fifth when Lyles left a 3-2 curveball middle away and Springer rocked it over the wall in left to make it 4-2.

After Tim Mayza ripped through the top of the Orioles order, Chapman hammered a two-run shot over the wall in left in the sixth and Adam Cimber, Anthony Bass and Yimi Garcia, who allowed a Gunnar Henderson solo shot in the ninth, closed things out from there.

The Orioles lost for the seventh time in 11 games since creeping within 1.5 games of the Blue Jays for the final wild-card spot at the beginning of the month, perhaps a sign their surge from doormat to relevance this season is petering out.

Manager Brandon Hyde, a finalist for the Blue Jays job when Charlie Montoyo was hired in the fall of 2018, spoke before the game about how beneficial this experience will be for his current group and before a rollicking Rogers Centre crowd of 36,573, another lesson was learned.

“These types of series are just different than the series in May or June,” said Hyde, whose team is going to be a problem in the AL East in the coming years. “To be able to play in games like this, for me, it gives you confidence going forward. That's the huge difference for us this year over last year, we got confidence, guys got confident their ability, guys got confident in each other. I feel like that kind of changed in May a little bit and we just stayed that way throughout. And you add Gunnar, who's a confident guy and extremely talented, the more games you can play in like this, the better.”

The Blue Jays did their learning last year. They’re intent on doing far more this time around and setting themselves up as best as possible for a wild-card series that will be tough no matter the opponent will be crucial in that regard.