Sportsnet.ca
Share on FacebookShare Share on TwitterTweet
The shocking win forces a winner-take-all doubles match on Sportsnet ONE with the tie now knotted up at 1-1.

The shocking win forces a winner-take-all doubles match on Sportsnet ONE with the tie now knotted up at 1-1 in Valencia.

Auger-Aliassime came into the match in poor form. The world No. 13, from Montreal, lost to Kwon Soonwoo of South Korea in a singles match at a Davis Cup tie on Tuesday and also lost in the second round of the U.S. Open.

Alcaraz, 19, was playing his first match since winning the U.S. Open title on Sunday, becoming the world No. 1 with his victory over Casper Ruud. 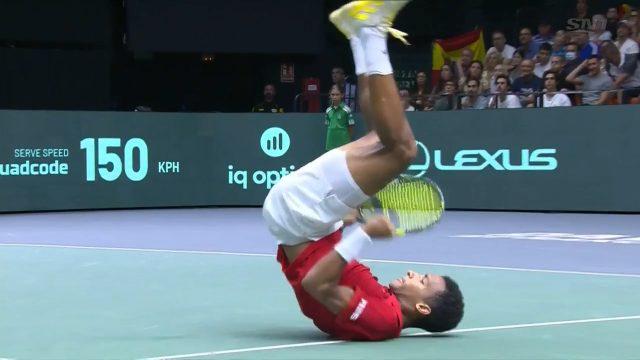 "I have to give him respect," Auger-Aliassime said. "It’s a big effort to win in New York and to come here, different surface, (go) across the Atlatnic and to show up with this level and this fighting spirit. Credit to him for that. Today, I think I showed at the end I was a little bit better in the third set. I gave it my all and that’s what you need to do to beat a player like him."

Auger-Aliassime broke Alcaraz in the first game of the third set and then did it again in Game No. 5.

The Canadian also fought off four break points while leading 2-1.

Auger-Aliassime was great with his serve, finishing with 16 aces while fighting off all seven break points he faced.

"I wasn’t going to let the team down with my fighting spirit," Auger-Aliassime said. "I was going to give it my all from the first to last point. That’s what I did. I’m really happy the outcome came up on my side. It’s a big relief to get that win and it’s an important win for me as well personally." 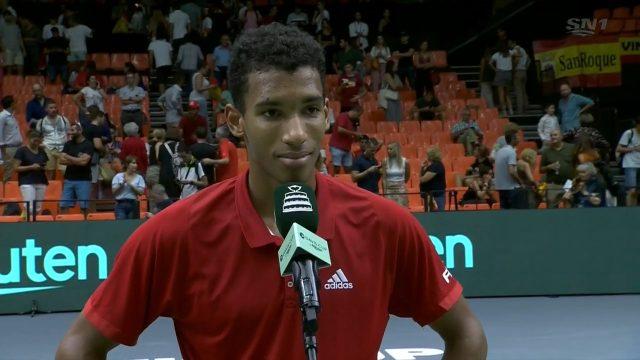 Spain beat Serbia 3-0 on Wednesday while Alcaraz was resting after jetting home from New York where he won his first Grand Slam on Sunday after a grueling run that included three consecutive five-set victories.

After Spanish fans had to stay up practically all night to watch his matches at the U.S. Open due to the time difference, this was the first chance many of his supporters had to watch him play at home since May when he won the Madrid Open. Alcaraz beat Nadal, Novak Djokovic and Alexander Zverev in the capital in what many saw as Nadal passing the torch to his Spanish successor.

Red and yellow flags were draped over railings at the pavilion, including one with the name of Alcaraz's home region, Murcia, painted in big black letters. Valencia, on the Mediterranean coast, is about 2 1/2 hours north of Alcaraz's hometown of El Palmar, population 24,000.

Another Spanish flag bore the message in Spanish, ``Carlitos, will you give me your shirt?''

Alcaraz had only one previous meeting with Auger-Aliassime, at the 2021 U.S. Open quarterfinals when the Spaniard had to retire due to injury.

Auger-Aliassime and Vasek Pospisil are scheduled to team up to face Marcel Granollers-Pujol and Pedro Martinez Portero in the decisive doubles match.

The top two countries after the round-robin advance to the Davis Cup Finals in November.

Canada earned a wild card into this year's Davis Cup after Russia was barred from competing due to the ongoing war in Ukraine.

With files from AP.