TSN
Share on FacebookShare Share on TwitterTweet
Sam Darnold passed for 207 yards and the New York Jets finally earned the first victory of their miserable season Sunday, holding on for a 23-20 win that erased the possibility of the third winless 16-game season in NFL history. 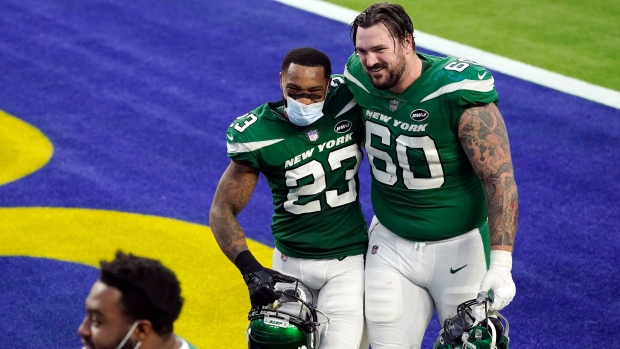 INGLEWOOD, Calif. — Sam Darnold and the New York Jets could have been forgiven for forgetting the victory formation, yet everybody knew where to stand when they got the chance at SoFi Stadium.

After 51 weeks and 13 games without a win, the Jets finally earned the chance to celebrate with pride.

“It’s the greatest feeling in sports to be able to ice the game out and know we had it,” Darnold said. “It’s the best."

The Jets (1-13) knew their 23-20 victory over the embarrassed Los Angeles Rams on Sunday was never pretty. Everybody realized it also came with a major drawback: New York is no longer in position for the top pick in the NFL draft.

Don’t try telling that to the joyful Jets who surged onto the field after the final whistle with the knowledge their names will not be attached to the ignominy of the third 0-16 season in NFL history.

Darnold passed for 207 yards in a steady performance, while Frank Gore rushed for a score that was his 100th career touchdown in the Jets' first win since the 2019 season finale. Gore also made a decisive third-down reception with 2:12 left for the Jets, who ended the longest losing streak in franchise history with a strong start and a gritty finish.

“I’m just happy for our guys,” coach Adam Gase said. “They’ve done such a great job of how they’ve worked. They’ve been through a lot of adversity. It’s been too long for us to even remember what a win feels like, almost. It’s great to see those guys that excited.”

Gase's club got its first win of the year only after blowing most of a 17-point lead in the second half. After a potential go-ahead touchdown for the Rams was wiped out by a penalty, forcing LA to kick a field goal, the Jets’ defence stopped the Rams again on downs near midfield with 3:54 to play.

Moments later, Darnold hit Gore with the short pass over the middle that allowed the Jets to run out the clock. It was only a 6-yard gain for Gore, who awkwardly backpedaled with the ball into first down territory It still meant a great deal to the young quarterback and his veteran running back.

“We knew we couldn’t give it back to them, and for us to be able to execute when we really needed to, that was something that obviously we haven’t done all year,” Darnold said. "To be able to execute and see it kind of come all into fruition, I think that was the biggest thing for us. It was an amazing feeling.”

With two games left, New York might have ruined its chances at the No. 1 overall pick because Jacksonville (1-13) is likely to win a tiebreaker based on strength of schedule. But possibly missing the chance to draft Clemson star Trevor Lawrence meant nothing to the players and coaches responsible for this lost season.

It certainly didn't bother Darnold, who looked right at home in his first pro game in his native Southern California. The former USC Trojans star went 22 of 31 with a touchdown pass and no interceptions.

“It doesn’t affect us," Darnold said. “We’re focused on one job every single week, and that’s winning a game. Anything other than that, we’re not focused on.”

New York had a 13-3 lead at halftime after holding the Rams to 97 yards, and the Jets led 20-3 midway through the third quarter. Los Angeles chipped the deficit down to three points with TD catches by Robert Woods and Tyler Higbee, but the Rams (9-5) couldn't finish.

Sam Ficken kicked three field goals for the Jets, whose 32nd-ranked offence put up only 289 yards against the NFL’s No. 1 defence — but scored enough points to win.

Of the nine teams in NFL history to start 0-13, the Jets were the fourth to win in Week 15.

The Rams could have clinched a playoff berth with a win. Instead, they were left with the most humiliating loss of coach Sean McVay’s largely successful four seasons in charge.

“In all three phases, it wasn’t good enough,” McVay said. “This loss will demoralize us only as much as we allow it to. It’s going to be embarrassing. Sick to your stomach about it, but we do have two games left. ... It’s very humbling, but we’re going to move forward. That’s all I know how to do.”

Jared Goff passed for 209 yards for the Rams, who had won four of five to surge to the top of the NFC West. Their offence was inept while their elite defence wasn’t sharp, allowing the Jets to convert seven third downs.

The Rams still can win the division if they can beat the Seahawks in Seattle next week, but their task got exponentially harder.

“We have a game coming up next week that we were going to have to win anyways, and I think we know that,” Goff said. “Obviously we’re disappointed with how today went, and embarrassed.”

The Jets started out just as impressively as they usually do, marching for a score on their eighth consecutive opening possession with an 18-yard catch-and-run by Ty Johnson. New York tacked on two field goals after a blocked punt and an interception by Bryce Hall.

New York opened the second half with a clock-consuming drive capped by a TD push on fourth down from the 1 by Gore, who scored the 16th TD of his career against the Rams.

Los Angeles’ offence finally awoke with a pair of 75-yard TD drives, and was in position for more — but Cam Akers’ 18-yard rush for a TD with 7:35 to play was wiped out by a holding penalty.

Jets safety Marcus Maye made a beautiful deflection of a throw intended for Gerald Everett on fourth down when McVay called a long pass play instead of trying a 55-yard tying field goal, which seems within the capabilities of kicker Matt Gay.