CBC.ca
Share on FacebookShare Share on TwitterTweet
Brady Tkachuk scored with 8.2 seconds remaining in regulation time to give the Ottawa Senators a 2-1 win over the Winnipeg Jets on Saturday afternoon.

Brady Tkachuk gave the Ottawa Senators a reason - finally - to celebrate against the Winnipeg Jets.

Tkachuk scored with 8.2 seconds left in regulation time to give Ottawa a 2-1 win over the Winnipeg Jets on Saturday afternoon. He deflected Mike Reilly's shot from the point past Connor Hellebuyck for his fourth goal of the season.

It was Ottawa's first win in five games against Winnipeg (8-5-1) this season. The matchup was a lot closer than Thursday night's contest, won 5-1 by the Jets.

"There's been a lot of bad bounces that went against us and to get a bounce finally [go] our way, hopefully it's the start of many," Tkachuk said. "We're definitely going to learn from this and learn from all the positives we had. 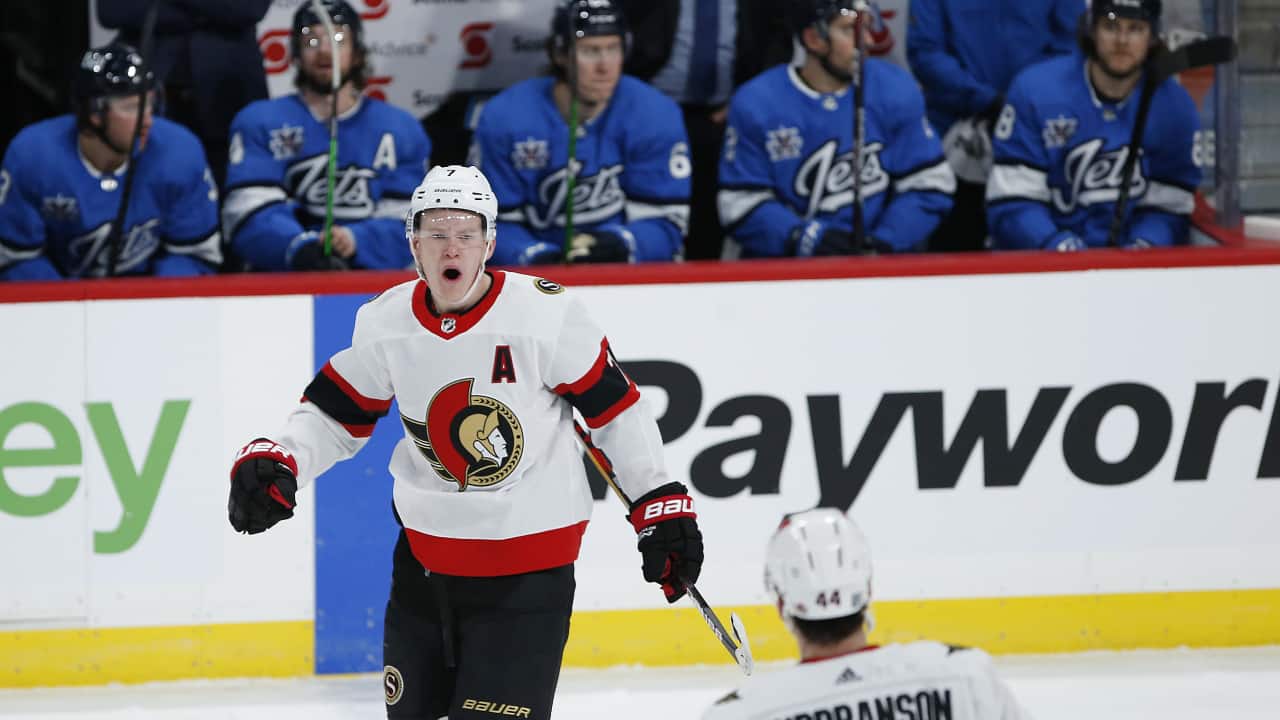 Brady Tkachuk's goal with eight seconds left in the third gave Ottawa a 2-1 win over Winnipeg. 1:20

"We played a full 60 [minutes]. They pushed hard but we stuck to [the] game plan. That's huge for us and that's a huge kind of maturity moment for our group. We're excited to use that moving forward now."

The Senators (3-12-1) are in Toronto on Monday for the first of three games against the Maple Leafs.

"We're going to take this one, have fun for a little bit but focus on the big three-game series coming up," Tkachuk said.

Evgenii Dadonov had the other goal for Ottawa. Mark Scheifele scored for Winnipeg, which was without forward Pierre-Luc Dubois (lower-body injury).

Ottawa goalie Marcus Hogberg stopped 30 shots for his first win of the season.

He got the start after Matt Murray (upper-body injury) was hurt Thursday night. Filip Gustavsson served as the backup.

The Senators are hopeful Murray will be able to play Monday night.

Rob Pizzo catches you up on the week that was in the all-Canadian division in the NHL. 2:54

"All the credit goes to Hoggy, he played unbelievable for us," Tkachuk said. "They [Jets] put us on our heels a little bit in the first and third and he was great for us.

"It's a nice feeling for him. It was a big one, we really needed this one."

Hogberg came into the contest winless in his five previous contests.

"It feels really good for myself and the team to get a win here," he said. "It was a good game by us, a full 60 minutes.

"I felt good [Friday] in practice and I just took my feeling into the game and just focused one puck at a time. We were really good in the [defensive] zone blocking shots and staying in the lane. I really liked our game today."

Hogberg said a key to his success Saturday was relaxing on the ice and not pressing.

WATCH | Rob Pizzo on the NHL's biggest pests through the years:

Matthew Tkachuk has spent the season driving players crazy, but he is far from the first to do it. Rob Pizzo looks at 9 other players who got under their opponents skin. 2:03

"A couple games I feel like my shoulders have been pretty tight," he said. "I think I was just too aggressive and wanted to play good."

Dadonov has scored three goals in his last four games.

"We've been waiting for a long time for the win so I hope it's going to happen more often," he said.

Before the game, Ottawa acquired forward Ryan Dzingel from the Carolina Hurricanes for forwards Alex Galchenyuk and Cedric Paquette. Dzingel was drafted by the Senators in 2011 and had two goals and two assists in 11 games this season.

Galchenyuk scored one goal in eight games for Ottawa while Paquette had one goal in nine games. Dzingel must quarantine for 14 days before he can play for Ottawa.

After a scoreless first period, Scheifele had the game's first goal at 5:43 of the second on a delayed Ottawa penalty.

That extended his point streak to six games and marked the 12th time this season the Senators allowed the opening goal.

But Dadonov pulled Ottawa even at 7:29 with his fourth of the season.