CTV News London
Share on FacebookShare Share on TwitterTweet
Police in London, Ont. are trying to understand what led to a vehicle hitting five pedestrians in the city’s northwest end, leaving four of them dead and a child in hospital.

LONDON, ONT. -- Police in London, Ont. are trying to understand what led to a vehicle hitting five pedestrians in the city’s northwest end, leaving four of them dead and a child in hospital.

Among the dead are a teenager, two adult women, and an adult male. A second child will survive but remains in hospital getting treatment for serious injuries.

Eyewitness Natasha, who wished only to share her first name, says she was on her way home from the beach with her family at the time of crash.

“We saw cars stopping and the first thing we saw was something moving on the corner...when we got closer we saw a kid with black hair,” she said.

Natasha explained in that moment she shielded her young daughter's eyes as she and her husband noticed two more people lying on the ground.

"(My daughter) was saying when we were home: the (child) was crying mommy, and it's dark now."

A second witness spoke to media Monday morning and described the scene as emergency vehicles arrived.

"It was just chaos. There were people everywhere and running," said Paige Martin. "Citizens were trying to direct the emergency vehicles where to go. There was a lot of pointing and screaming and arm waving."

Monday morning London Police Service's (LPS) media officer Const. Sandasha Bough held a press conference where she confirmed that four of the five victims had succumbed to their injuries.

One woman was pronounced deceased on scene, while the teenager and two other adults later died in hospital.

Investigators remained on scene Monday trying to piece together exactly what led to the deadly crash.

Nearly a dozen officers could be seen walking side-by-side looking for evidence. 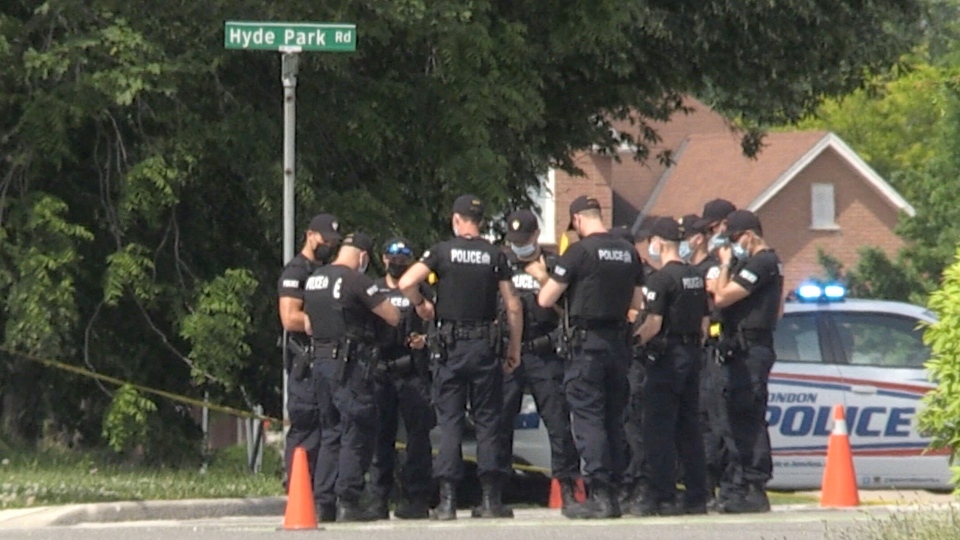 All that is known so far is that the suspect is a 20-year-old London man who was arrested roughly four kilometres away from the scene in the parking lot of Cherryhill Village Mall on Oxford Street.

Police were also seen at the mall Monday morning but have since cleared.

So far no charges have been laid but that is expected to change and Bough said that more details will be provided once that happens.

The ages or relationships of the victims remain unclear.

"I'm still in shock," said Martin visibily emotional. "I'm very shaken up knowing there's kids, multiple kids. It's awful, this family is just out for walk ... My heart is so broken for them today."

This is the most recent deadly crash involving pedestrians in Ontario. On May 16, two young children were struck and killed in Vaughan, Ont. while playing on their driveway.

A third male victim, their neighbour, was injured in the crash but survived.

Meanwhile condolences to the family and friends of the victims in the London crash are pouring in over social media:

Our deepest sympathies to the families of the three adults and one teen who lost their lives in Hyde Park last night. Our thoughts are with them, and with the family of the child who remains in hospital. | #LdnOnt

My heart breaks for the families of the four individuals who were tragically killed last night in Hyde Park. Words can never express how we feel at this time, and I know all of London shares in that grief. We await further updates from @lpsmediaoffice on this unspeakable tragedy.

With files from CTV London's Tamara Heisel and Reta Ismail.