Forbes
Share on FacebookShare Share on TwitterTweet
It's the seasons to see—and possibly hear—northern lights. Here are some surprising things you never knew about this all-sky phenomenon. 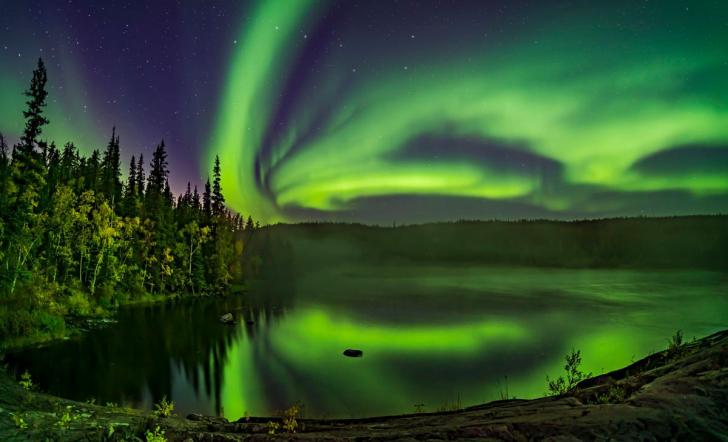 Have you ever seen the “dancing lights?” To glimpse the northern or southern lights from the polar regions is a true bucket list sight, but the more you know about them the bigger your chances of seeing them—and also, perhaps, hearing them.

Yes, aurorae make a sound. They also appear on almost every planet we know of and could hold the key to the future of astronomy.

Here are eight things you didn’t know about aurorae:

“Around here they tend to come about 10pm but never after midnight.” It’s common to hear such remarks from people who live around the Arctic Circle, but it’s just not true. “Aurorae are a permanent feature of the upper atmosphere, they never disappear, and what you see has everything to do with where you are and how dark the sky is, “ said Tom Kerss, a freelance astronomer and astrophotographer at Stargazing London who just published Northern Lights: The definitive guide to auroras. “The Northern Lights are just an expression of the constant connection between the Sun and the Earth and they never go away—we just have to wait for the sky to get dark enough and you need to be in the right place to observe them.”

Go out between 10pm and 2pm—the darkest time of night—for the best views, but you can see them whenever its dark … even in summer.

2. ‘Aurora borealis’ is a modern term coined by Galileo

The “northern lights” is the traditional term, “aurora” the scientific. “The term aurora borealis is a relatively modern term for the northern lights coined just over 400 years ago by Galileo Galilei in 1616,” said Kerss. “It sounds like it’s from antiquity but it wasn’t known to ancient people.” Aurora means dawn and borealis means northern, largely because Galileo was in Italy where the northern lights are almost always glimpsed in the northern sky, if ever, and could be mistaken for dawn.

Not so in the Arctic Circle. “The term northern lights goes back 1,000 years and originates from Nordic languages,” said Kerrs. “They had no reason to call them the “dawn of the north” because they could distinguish the northern lights from the dawn light.”

3. The aurora make a sound

For decades dismissed as a psycho-acoustic phenomena, the snapping, crackling sound of aurora are something that some people know from experience yet have a hard time convincing others. Can aurora—which occur in the ionosphere hundreds of miles up—really make sounds? It seems so. “A team at Aalto University in Finland, led by an acoustic researcher, actually managed to record what we consider to be quite credible recordings of aurora noise,” said Kerrs.

It’s proposed that around 70 meters above the ground when the circumstances are just right it’s possible for a pocket of warm air to hold a trapped static charge that discharges when the air dissipates. It’s tied to the geomagnetic conditions, so linked to the aurora. “It’s interesting because if you look at myths from Greenland about the northern lights they involve a whistling or crackling sound … there was a strong feeling that the aurora could speak,” said Kerss. “But it’s the white whale of aurora chasing—I’ve never heard it.” Put it in the same cosmic drawer as the ashen light of Venus.

4. Aurorae are slightly stronger around the equinoxes

It’s freezing in January in the Arctic Circle and, in any case, you’ll probably get more frequent displays of aurora in the warmer months of September or March. “It’s due to something called the equinoctial effect, which has only been relatively recently understood,” said Kerrs. Think of the Sun and Earth as bipolar bar magnets. If you have two magnets interacting if their poles are aligned in a certain way then you can enhance electromagnetic activity in the magnetic region around them.

So go aurora-hunting in late September and in mid to late March (though try to avoid a bright full Moon, which can dull faint aurorae).

5. Only one planet in the Solar System lacks aurorae

There are aurorae on all the planets and some of the moons in the Solar System—with one exception. “Mercury lacks anything we can call an atmosphere—it’s just a gaseous envelope, a bit like our Moon,” said Kerrs. “But we’ve detected auroral activity on Venus, Mars, the gas giants and the ice giants—so future explorers may well get to see northern lights and southern lights on other worlds.”

The most dramatic, brightest and fastest-moving aurora form on Jupiter, though there’s nowhere to physically stand to see them. “You would see every color of the rainbow, they would be so extraordinarily bright and vivid,” said Kerrs. In fact, Jupiter has such an intense radiation environment that it creates aurora on its own moons—and we’ve detected them on Ganymede and Europa. On the former the detection helped scientists confirm the presence of water. “In future we’ll find aurorae on exoplanets and maybe even on other stars,” said Kerrs. “They’re a proxy to understand the magnetic fields of worlds outside out Solar System, which is presently one of the hardest things to do.”

6. Captain Cook saw aurora near the equator in 1770

Aurora normally happen around the Arctic Circle and the Antarctic Circle, but if there’s a really strong geomagnetic storm then they become visible further north or south. That’s what happened in 1770 when the legendary Captain James Cook recorded seeing the southern lights from his HMS Bark Endeavour when9º south of the equator at Timor Island—and for nine successive nights. “This tells us something about the, the infrequency and strangeness of aurorae at these latitudes, which have occurred throughout history, albeit very rarely—maybe once a century,” said Kerrs.

Cook’s sighting may have been a once-in-a-century lighting that close to the equator, but it was toped in 1859 by the famous Carrington Event of late August and early September 1859, when astronomer Richard C. Carrington observed the most powerful geomagnetic storm known to date.

A solar storm of similar intensity right now could have catastrophic effects; solar storms in Quebec, Canada in 1989 and in and Malmö, Sweden in 2003 knocked-out electricity grids … but now the internet could be in serious trouble.

“The Carrington Event—one of the biggest solar flares in history—almost certainly brought vivid auroral arcs to every single night sky on Earth, including right on the equator,” said Kerrs. Such a display hadn’t been seen before and hasn’t been observed since—but a massive once-a-century solar flare is now overdue.

In April 1972, the moonwalkers of Apoll0 16—Charlie Duke and John Young—took a far-ultraviolet electrographic camera to the Moon that took a photograph of the auroral oval around Earth’s poles. “Important and extensive science was done during the later Apollo missions,” said Kerrs. “It was a pioneer for ultraviolet astronomy, which can only be done from outside of Earth’s atmosphere and which is really successful today.”

As a result we now have missions like the Hubble Space Telescope and the upcoming James Webb Space Telescope. “It’s only because of all of this ultra-violet astronomy that we've discovered aurora on other worlds,” said Kerrs.