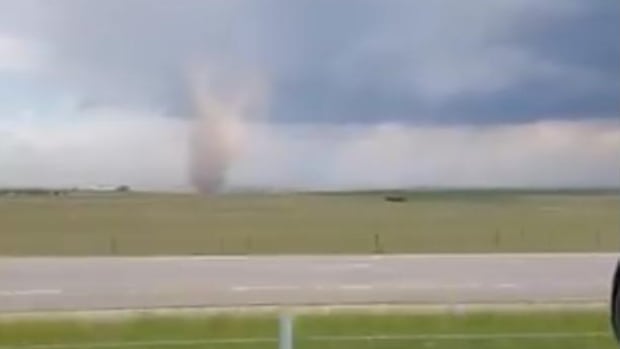 At 3:16 p.m., the tornado alert for Vulcan County was downgraded to a severe thunderstorm warning.

The possible tornado was first spotted east of High River shortly after 2 p.m. Later alerts for tornado sightings were issued for the hamlet of Blackie and the hamlet of Harrington. The storm had been moving east at 30 km/h, in an area about 65 kilometres southeast of Calgary.

While the alerts were all issued in the same area, it was not immediately clear whether multiple tornadoes or a single storm were passing through.

Environment Canada said alongside the tornado, damaging winds, large hail and intense rainfall were also possible in the area.

"This is a dangerous and potentially life-threatening situation. Take cover immediately, if threatening weather approaches," the weather agency said.

The tornado sightings blew in alongside severe thunderstorms, which triggered watches and warnings for much of southern Alberta, including Calgary, Cochrane and Airdrie.

According to the weather agency, such storms can bring with them the possibility of strong wind gusts, heavy rain and hail as large as ping pong balls in some areas.

In Calgary, the thunderstorm brought reports of hail and lightning strikes in parts of the city.

At 1:30 p.m., a small fire was started when lightning struck the roof of James Fowler High School in the city's northeast. Fire crews are investigating to ensure the school's electrical system wasn't damaged.

The watches were issued Saturday morning with the agency saying thunderstorms will have the potential to produce severe weather until late in the evening.

Flood watch advisories were also in effect for the Bow River upstream of Banff, including Lake Louise and the Pipestone River.

For the latest weather alerts, visit the Environment Canada website.