Lightning must keep pushing to win Game 4 of Cup Final, even series

NHL.com
Share on FacebookShare Share on TwitterTweet
TAMPA -- If the Tampa Bay Lightning needed a candid assessment of their play through the first three games of the Stanley Cup Final against the Colorado Avalanche, coach Jon Cooper received it from one of the most trusted sources in his household. 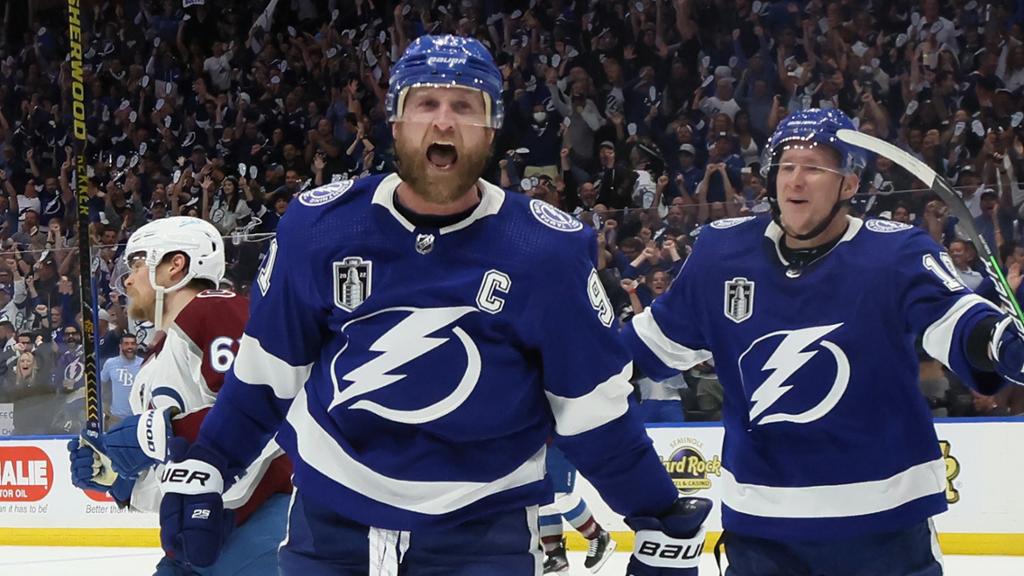 TAMPA -- If the Tampa Bay Lightning needed a candid assessment of their play through the first three games of the Stanley Cup Final against the Colorado Avalanche, coach Jon Cooper received it from one of the most trusted sources in his household.

"Well, as my son said, 'Dad, your first game was a borderline C-plus. Second game was an F,'" Cooper said Tuesday. "He gave us into the Bs in [Game 3]. So we're trending in the right direction."

Colorado leads 2-1 in the best-of-7 series, so Tampa Bay will likely need its A game in Game 4 at Amalie Arena on Wednesday (8 p.m. ET; ABC, ESPN+, CBC, SN, TVAS). But as Jonny Cooper's grading of the Lightning's 6-2 win in Game 3 on Monday suggested, there is reason for the two-time defending Stanley Cup champions to feel better about themselves.

Needing to push back following a 4-3 overtime loss in Game 1 and a 7-0 loss in Game 2 in Colorado, Tampa Bay rebounded with its best effort of the series. Now, the Lightning need to build on that to even the series.

"I think yesterday we really came prepared, dialed in, ready to play and we just kept building off each other," Lightning forward Nicholas Paul said. "So I think that's the another key tomorrow. Just the same attitude. It's another huge game for us, so just come in ready to play and play for each other and get ready for the battle."

For the first time in the series, it's the Avalanche's turn to make adjustments. After dictating the pace with its speed and forcing Tampa Bay to play in its end for much of the first two games, Colorado was the team committing turnovers in its defensive zone that led to goals.

Avalanche goalie Darcy Kuemper paid the price, giving up five goals on 22 shots before being replaced by Pavel Francouz 11:15 into the second period. But it wasn't all bad for Colorado; it outshot Tampa Bay 39-33 and went 2-for-4 on the power play to improve to 5-for-11 with the man-advantage in the series.

The Avalanche just couldn't find a way to score an even-strength goal on Andrei Vasilevskiy, who made 37 saves after allowing seven goals in Game 2.

"We didn't feel like we played a terrible game last night," Colorado defenseman Devon Toews said. "I think some unfortunate breaks went their way and any time we made a mistake, it ended up in the back of our net. Some nights it's going to be like that and some nights you're going to get fortunate with those, and last night we didn't get as fortunate."

Each team has health issues heading into Game 4. Forward Andre Burakovsky remains in Denver after being hit in the hand with the puck in Game 2. And though Avalanche coach Jared Bednar said center Nazem Kadri (hand surgery) is getting closer to becoming an option to play, it doesn't sound like he'll be ready to play Game 4.

For the Lightning, Cooper said he thinks Nikita Kucherov will be able to play. The forward left in the third period Monday after his left leg bent awkwardly when he fell to the ice following a cross-check from Toews. The news was less positive for center Brayden Point, who Cooper said is "highly doubtful" to play after he missed Game 3 with an undisclosed injury.

Colorado also has a question mark in net with Bednar declining to say if Kuemper or Francouz will start Wednesday. Regardless of which goalie plays, Bednar said the Avalanche need to raise their game as a team.

"Our whole team has got to bounce back and be better than we were," Bednar said. "I think last night, there was some good, but one of the things is they had the competitive advantage last night. In Game 1 and 2, I think we had it. So that will get ramped up a little bit for us here tomorrow. There will be some desperation in our game, and we'll clean up some of the mistakes that we had, and I think all of our guys are going to respond after losing last night."

Though Tampa Bay played better Monday, the Lightning said they believe they haven't played their best yet in the Final. After rallying from being down 2-0 to the New York Rangers in the Eastern Conference Final, Tampa Bay knows it has plenty of work left to do after winning Game 3 to cut into Colorado's series lead.

"I feel we have more to give, but we are trending in the right direction," Cooper said. "I know it's similar to the last series, being 2-1, but we still need to win the next one. It'll be tough on us if we just sat here and said, 'OK, we got one. We're going to be OK tomorrow.' Each game gets tougher and tougher, but the guys, give them credit. They knew what they had to do, and they did it.