CTV Toronto
Share on FacebookShare Share on TwitterTweet
A possible tornado ripped through a Barrie, Ont., neighbourhood Thursday afternoon, leaving a trail of destruction in its wake.

BARRIE, ONT. -- A possible tornado ripped through a Barrie, Ont., neighbourhood Thursday afternoon, leaving a trail of destruction in its wake.

An Environment Canada tornado warning blasted over the airwaves and to cell phones around 2:30 p.m. as the skies darkened over the south end of the city and heavy rain fell.

Barrie resident Sheldon Murphy said they were in the kitchen when the warnings sounded. "We saw stuff starting to fly around in the air, spinning. That's when we got everyone down in the basement. Then five minutes later, it started to clear up."

The storm lasted roughly 10 to 15 minutes and was followed by sirens as emergency crews headed to the Mapleview Drive and Prince William Way area.

Barrie police said thousands are without power this afternoon.

"It looks very symbolic, unfortunately, to a war zone in places," said Barrie police spokesperson Peter Leon. "The damage is catastrophic. It is significant, and it is major."

Leon said multiple people were injured. "We do have officers that are making their way through the neighborhoods," he added, saying emergency services were checking to ensure no one was trapped.

Simcoe County Paramedics are providing triage at Saint Gabriel the Archangel Catholic School to anyone injured in the storm.

Police are urging anyone who doesn't live in the area to avoid it. 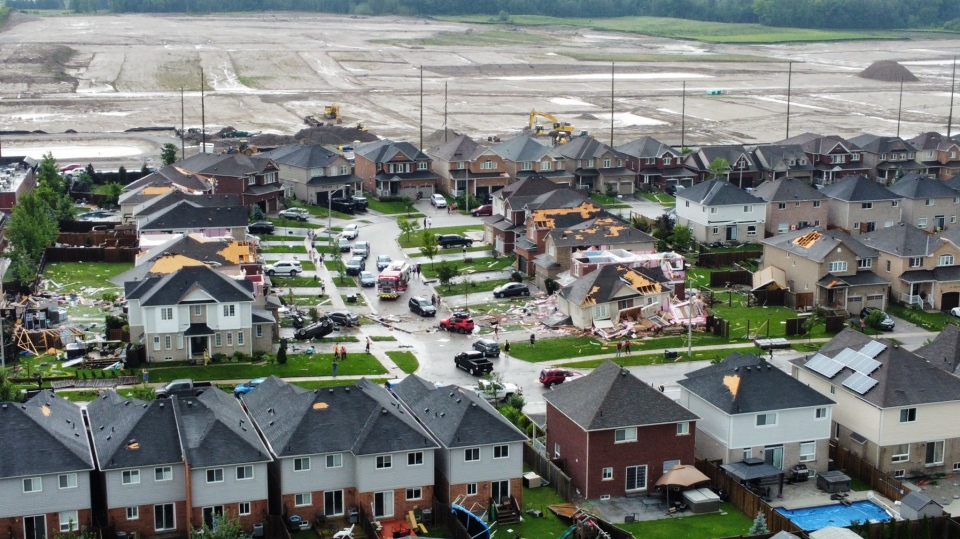 Premier Doug Ford posted to social media expressing his sympathy for those impacted by the storm.

"My thoughts are with everyone in Barrie and Innisfil affected by the severe weather today. A big thank you to our first responders that are currently on the ground helping the situation. Please stay safe everyone!"

While residents reported seeing a tornado and shared pictures and video of serious damage in the aftermath, Environment Canada has not yet confirmed whether a tornado occurred.

The weather agency said it would send a team to survey the storm damage in Barrie. Meteorologist Steven Flisfeder told CP24 based on the images that he has seen, it would appear "very likely."