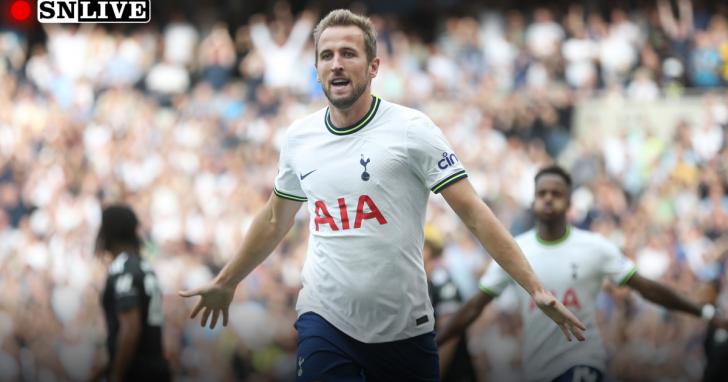 Tottenham Hotspur begin their 2022/23 Champions League campaign at home to Marseille with Antonio Conte's team looking to build on their impressive start to the season.

Spurs come into Wednesday's match on the back of a 2-1 home win over Fulham, a result that lifted the still-unbeaten North London outfit up to third place in the Premier League table.

A favourable group-stage draw, however, has given Tottenham a good chance of making the last 16 with Conte's team pitted against Marseille, Sporting CP and Eintracht Frankfurt in Group D.

Marseille have enjoyed a good start to the season, winning five of the six Ligue 1 matches they have played and drawing the other one. They will carry a threat at Tottenham Hotspur Stadium.

61 mins: Romero picks out Perisic with a sensational ball in behind, but the Croatian winger couldn't bring it down first time and then Richarlison shoots wide. Spurs are on top, but they're still struggling to create much in the way of chances!

55 mins: Son shoots! Spurs are now dominating possession much higher up the pitch and they create the shooting opportunity on the edge of the box, but Son doesn't catch the effort well and the ball dribbles harmlessly wide of the target.

53 mins: BOOKING - Dier (Tottenham). That had been coming for Dier who has committed one too many fouls. He goes into the book.

50 mins: Marseille sub: Gerson OFF, Balerdi ON. There's the change from Tudor and it looks like Marseille have shifted into a back four.

47 mins: SENT OFF! Mbemba (Marseille) - A big moment in this match! Son is played in behind, he has the pace to beat his man, he gets to the ball first and is through on goal, but Mbemba brings him down and the referee shows him a straight red card! Marseille are down to 10 men.

Chancel Mbemba takes down Heung-Min Son towards the edge of the box and is shown a straight red ????#UCL pic.twitter.com/BeoNLgHRye

46 mins: The second half is under way. Spurs were out five minutes early which says a lot about how Conte viewed the opening 45 minutes.

45 mins: HALF TIME! Tottenham Hotspur 0-0 Marseille - Not a great deal to write home about after that first half. Marseille have dominated possession, but have created little while Tottenham have been off the pace and have also struggled in the attacking third.

42 mins: Kane... wide! Tottenham come forward on the break with Son feeding the ball to Kane inside the Marseille box, but he sends his low shot wide of the far post! His body shape was wrong for the shot. That was Tottenham's best chance so far, though.

40 mins: Tavares has time and space to get a delivery into the Tottenham area from the left side, but Lloris comes off his line to gather. The on-loan Arsenal full back has looked dangerous down the wing for Marseille. That has been a useful channel for them.

37 mins: This has been impressive from Marseille. They have nipped any Spurs momentum in the bud and have taken control of possession again. Can they do more to break through the Tottenham defence, though?

34 mins: Shot blocked! Tottenham get players forward into the box for the first time in the match, but Kane ignores them all, cuts inside and takes aim, but Tavares makes the block. That, however, has lifted the atmosphere inside the stadium! Can Spurs use that moment to get going?

30 mins: Half an hour gone at the Tottenham Hotspur Stadium and the home team have yet to get going. Marseille have created very little with their possession, but Spurs have offered next to nothing themselves.

27 mins: Lopez was caught by the flailing arm of Kane and the Marseille goalkeeper is receiving some treatment for a cut to the top of his eye. Play will get back under way shortly.

26 mins: Marseille have dominated possession so far and yet they haven't got much to show for it. Tottenham have looked solid at the back. They just need to make a greater impression in quick transition. Both teams have been toothless so far.

24 mins: A familiar face in the away support at the Tottenham Hotspur Stadium. Is he still speaking in that French accent?

Joey Barton is amongst the travelling Marseille fans at the Tottenham Hotspur Stadium.#UCL pic.twitter.com/W7anogHCz1

20 mins: The tempo in the first 20 minutes of this match hasn't been the highest, it must be said. But much of that is down to Tottenham's willingness to stand off Marseille when they have the ball. Nonetheless, Spurs could do with playing quicker when they have possession.

16 mins: Lopez takes a risk! The Marseille goalkeeper takes an extra touch under pressure from Kane, but he keeps hold of the ball and passes out from the back. He might not want to do that again!

14 mins: We're still waiting on the first goalmouth action of the match. Marseille have been impressive in the early stages. They are comfortable on the ball and are pressing high and hard when they are out of possession. But no chances for either team yet.

10 mins: Dier fouls Suarez on the halfway line. It was a rash challenge from the Spurs defender, but the referee keeps his cards in his pocket.

9 mins: The away team are playing with confidence. It must be said, though, that Tottenham like to invite opposition teams on top of them before hitting out on the counter attack. Conte won't necessarily mind what he has seen in the opening nine minutes.

6 mins: Marseille have actually settled quickly in this match. They look comfortable on the ball and will carry a threat through players like Guendouzi, Suarez and Gerson.

3 mins: There has been a great deal of anticipation among the Tottenham support ahead of this match. It's been two-and-a-half years since Spurs last played in the Champions League. Can they start their 2022/23 campaign on the front foot?

1 min: The match is under way! The Champions League is back in North London! Spurs are in all-white while Marseille are in a lighter blue.

5 mins to KO: Not long until kick off at the Tottenham Hotspur Stadium. Marseille have been in good form recently, but they will need to produce their best performance of the season to claim something tonight.

15 mins to KO: Son hasn’t been in the best of form for Tottenham in the early part of this season, but there were signs of life from the South Korean in the win over Fulham at the weekend.

25 mins to KO: Marseille boast a lot of players who will be familiar faces to Premier League fans. Sanchez is missing for them tonight, but Guendouzi, Bailly, Veretout and Payey all play for the Ligue 1 club! Can any of them make the difference tonight?

Sanchez is suspended for Marseille and so Gerson and Luis Suarez are picked to start in attack for the Ligue 1 side who have now arrived at the stadium.

Conte makes one change to the team that beat Fulham at the weekend with Perisic starting in place of Sessegnon in the left wing back position.

60 mins to KO: Some reporting that Marseille have yet to arrive at the Tottenham Hotspur Stadium for tonight's Champions League match. Reminder - the match starts at 8pm BST!

75 mins to KO: Conte doesn’t have the best of records as a manager in the Champions League. He has won just 12 of the 54 matches he has coached in the competition. Can he improve on that record with Spurs this season?

90 mins to KO: Hello and welcome to The Sporting News' LIVE coverage of the Champions League Group D fixture between Tottenham Hotspur and Marseille.

Spurs have enjoyed a good start to the season and are unbeaten after six matches in the Premier League, but can they get their Champions League campaign off to a winning start?

Ivan Perisic has returned to the Spurs lineup after being rested for the Premier League win over Fulham, but Ben Davies and Dejan Kulusevski have to make do with a place on the bench.

Alexis Sanchez is suspended for Marseille, carrying over a ban from last season when he was an Inter Milan player.

Bamba Dieng and Cedric Bakambu have both been omitted from Marseille's Champions League squad while Dimitri Payet has been left out due to injury concerns.

UK: BT Sport will be showing the match live on TV and online/via the BT Sport app.

USA: CBS streams every match on Paramount+, with select matches televised on CBS or CBS Sports Network. Univision places select matches across its TV networks (Univision, TUDN, UniMas, and Galavision) and also makes all matches from the group stage on available via its ViX streaming platform. Any matches televised by either CBS or Univision can also be streamed on fuboTV.